After our bit of trivia earlier today we thought we’d pay tribute to a rather remarkable musician – Seth Weeks.

Silas Seth Weeks was born this day in 1868 in Vermont, Illinois, and was an American mandolin, violin, banjo, and guitar player who also composed. 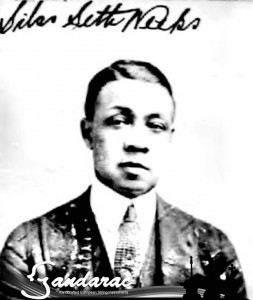 Although he was multi-instrumental, he concentrated professionally on the mandolin. He is considered to be the first African American to play mandolin during its golden period and was considered instrumental (no pun intended) in bringing the mandolin to the prominence that it had in the early 1900s.  Additionally, he was the first American known to have written a mandolin concerto (in 1900) and led a mandolin and guitar orchestra in Tacoma, Washington.

One of his musical goals was to make the mandolin independent of other instruments.  To this end, his playing style emphasised the duo style, a particular way of playing such that the mandolin takes the melody, counter melody and harmonic parts simulataneously.   When done properly the duo style produces a sound that appears to be of two or more instruments rather than just the one.  It seems he succeeded, since a review stated that he had “included harmony with the melody in most of his arrangements”.

In today’s modern world, Weeks would have needed a pickup and what better than one of our Schatten Design Acoustic Pickups.  Click here for details.

We’re so excited…
We just can’t hide it…

Although we’ve had them for a little while now, we’re announcing the formal June UK&I launch of the latest from Schatten Design Acoustic Pickups  – Banjo and Resonator pickups with a microphone.  You’ve been asking for this for a while and one of the joys of dealing with a smaller company is that they listen and develop with you, the customer, in mind.

We thought we’d give our Blog fans first look at them ahead of the advert, shown in the picture, in June’s edition of Acoustic Magazine. The advert will be easy to find for all you banjo fans as it’ll be with the Magazine’s great editorial piece. So here are the links: Banjo and Resonator

We’ve only just come across this, so we’re a few days late if you were thinking of attending, but thought you might find it interesting nonetheless.

The fifth annual Brooklyn Folk Festival’s Gowanus Banjo Toss took place on Sunday, April 19, 2015, in the Brooklyn borough of New York.  About two dozen people participated in this now annual event.  Eli Smith, who conceived the event, said, “I love the banjo, but sometimes I have the perverse desire to see it thrown into a body of water.” – we are pleading the 5th 😉

The picture is of event founder, banjo player, and folk music promoter Eli Smith tossing a banjo during the festival. 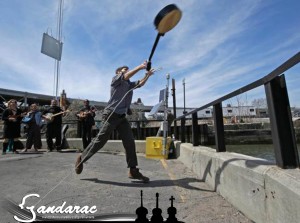