Today is not only the end of the week but the end of the month too, meaning that tomorrow sees the start of October and, with that, the beginning of what has become a bit of a Sandarac tradition… giving to a breast cancer charity.

We’ll publish full details of what we’re doing this year on Monday.

Once again we have a plethora of composers from which to choose. However, as with the other day when we shunned the easy option of merely listing them all, we have chosen a musician to whom to pay tribute today.

As famous viola players are far a few between, not to mention usually being the butt of jokes, we thought it was high time the balance was redressed and hence have chosen to pay tribute to Rudolf Barshai who was born this day in 1924. 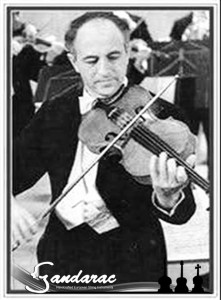 Barshai studied at the Moscow Conservatory. He performed as a soloist and as a member of a trio with Mstislav Rostropovich and Leonid Kogan winning numerous Soviet and international competitions. He was the founding violist of the Borodin Quartet in 1945 and remained a member until 1953. Later, he studied conducting at the Leningrad Conservatory.

A biographical film, The Note, was made about Barshai in 2010 by Oleg Dorman.