We start the week with a birthday tribute to Jacques Offenbach

Born this day in 1819 Offenbach is best known for his operettas together with his unfinished opera, The Tales of Hoffmann.  Whilst we cannot do his rich and varied life justice in a short blog, we’ll try to bring you the ‘highlights’. 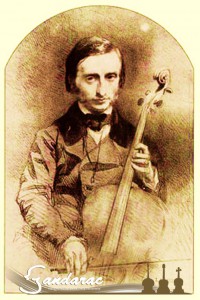 Offenbach came from a musical family and at the age of six his father taught him the violin but aged nine he switched to the cello (what is it with June and cellists?).  A mere three years later Offenbach was playing his own compositions, the technical difficulty of which frightened even his master.

Whilst Offenbach’s equally musical older siblings applied themselves to their studies, Jacques got bored and left the conservatoire after only a year.  He had several jobs before taking a permanent appointment at the Opéra-Comique.  Unfortunately, he was frequently docked pay for playing pranks during performances; one example of which was when he and another colleague played alternate notes.

Eventually he settled down to playing his compositions across the salons of Paris.  From there he began to tour the major towns and cities of Europe in order to extend his fame and, with it, his earnings.  In 1844 he returned to Paris with an increased reputation and bank balance.  The return to Paris also saw a change in emphasis for Offenbach from cellist-composer to a composer who also played the cello.  He also took advantage of his new found standing to marry.

The 1850s saw Offenbach’s operettas being staged but the 60s was by far and away his most successful period.  The start of the Franco-Prussian war saw Offenbach leave Europe and head for first England and then the United States.  He returned to Paris when it was safe and died in 1880.